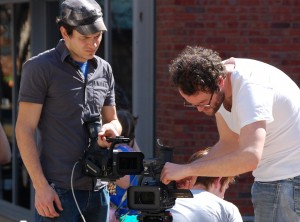 RALEIGH – With budget negotiations in full swing, a big sticking point is going to be film industry incentives. The Senate and Gov. Pat McCrory have $10 million allocated for the film grant program while the House has $40 million. The grant program was set up last year after the former film incentive program, a refundable tax credit, was ended despite objections from the film lobbyists and legislators representing the Wilmington area, where film is a major industry.

“If the powers that be in the Senate are trying to kill the film industry, they’re doing a good job,” said Rep. Ted Davis of New Hanover County, home to Wilmington, home to the largest movie production facility east of California. “Every bill I hear about is a jobs bill. Film is already here and it’s an industry that gives good people good jobs, when we are working so hard to draw new jobs.”

From a ledger standpoint, the previous film tax credit program was reportedly causing the state to hemorrhage money. While the new grant program is capped at $5 million annually per project with a more thorough vetting process, the old refundable tax credit had no cap and no firm estimates of how much a film project would claim. According to the Commerce Department’s Jeff DeBellis, Manager of Economic and Policy Analysis, the state had a $56 million net loss through the old program.

“The biggest challenge is that we just can’t put a number behind the benefit. We estimate that we got back about 20 percent of what we gave out,” said DeBellis.

But Davis says that doesn’t tell the whole story. He says that the economic boost in the communities surrounding a film project aren’t being captured as a benefit of the incentives.

“Under the old system you had an audit at the end of production, they had to prove they did what they said they would and meet benchmarks. It wasn’t a blank check,” said Davis.

“But it didn’t give the whole picture. You could not get the most important part, the filter down effect of all the suppliers to the film industry. No, it doesn’t add up to the reimbursement, but that’s because you can’t put your finger on the intangible economic impact, its huge.”

With McCrory’s focus on bringing jobs to the state, Commerce Secretary John Skvarla is trying to find the solution. He is on the road constantly, talking to all different industry leaders and campaigning to get companies to set up shop or grow in North Carolina. The film industry is no exception. In the past few weeks he’s visited six movie studios, two in North Carolina and four in California, meeting with executives and studying other states’ film incentive programs.

We want the film industry here,” said Skvarla. “We are working hard to make this work, to figure out the secret sauce.”

The challenge for Skvarla is how to structure the program so that long-term projects, like the television show “Under the Dome,” currently filming in Wilmington, decide make their home in North Carolina. Jobs like the ones around the popular show have longevity and keep money predictably flowing through the local economy. Movie productions on the other hand, while exciting and high profile, provide temporary employment and then head out of town, taking the jobs with them.

“When I first dug into this I thought that surely we were missing something, some big benefit,” he said. “The film industry is transient, they often bring their own people when they come to the state. There is some continuous employment in the community, but most are on contract so there’s no real continuity.”

The other challenge is the economics of the film industry itself. A large chunk of movie costs are wages and the industry pays union rates even in a Right to Work state like North Carolina. That makes costs relatively fixed and high. The state can’t offer a better deal than its neighbors, and movie companies, like other industries, are looking for the best deal. The best deal often means putting cash in their hands to set up shop, no matter how temporary the work. States such as Georgia and South Carolina are doing just that and drawing projects to the south.

“Prior to incentives, when the playing field was level, North Carolina was an attractive location with available crews, infrastructure, diverse locations and a moderate temperature,” said Joe Bessacini, vice president of film and TV production incentives for Los Angeles-based Cast and Crew Entertainment Services. “But movie-making is a business and without incentives, North Carolina will not be able to compete.”

Over the past decade, more states are trying to draw movie projects with financial incentives, raising the stakes and costs higher and higher.  But industry insiders say that determining whether they’re really making money is difficult.

“Certain folks have different ideas on what that means. Is the goal to make money right here, right now? Or is it to stand up an industry?” said Guy Gaster, Director of the N.C. Film Office. He is charged by the Commerce Department with marketing the state to the film industry. “Unfortunately it’s not a cut-and-dried answer. You have to look at what the money is going toward. The state is putting out some money, what is it getting back in return? That is what people are really studying.”

Other states like Louisiana and Michigan are either ending or dramatically scaling back their film incentive programs. Skvarla hopes that by changing the formula for film incentives and trying to properly estimate the economic impact of the support industry, a film grant program can still thrive in the state and keep jobs here. He is supporting the governor’s $10 million allocation for the industry grants, and Gaster says that money will help.

“This year the $10 million was gone after the first round of applications,” said Gaster. “At the end, if it’s 10 or if it’s 40, that’s what we are going to use to market the state.  It could mean adjusting what our focus is and being smart about what we approve.”

In the meantime the Commerce secretary is working to shape the program and solve what he calls the film incentive “Rubik’s Cube,” while budget negotiators crunch the numbers. The antique shops, lumber yards, vintage car dealers and other businesses serving the film industry hope that the result will be enough. All are betting that North Carolina’s dropping tax rates, grant program, diverse landscapes, low cost of living and “Everytown, USA” feel will keep the cameras rolling.