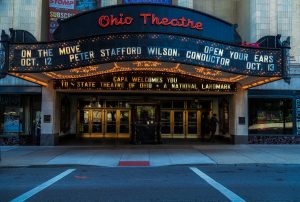 Since 2009, Ohio has been enticing production companies to film in the Midwest by offering a generous incentive program, which includes a 30 percent taxcredit on cast and crew wages and qualifying goods purchased or rented and consumed in-state. While the incentive is administered on a first-come, first-served basis, priority is given to TV series and miniseries. To be considered, a production must spend at least $300,000 and fall under one of the many types of projects that qualify – feature films, TV series/pilots, mini-series, documentaries, commercials, digital media, interactive games/television/ websites, video games and webisodes.

Hopefully, the current efforts behind 2018’s House Bill 525, which proposes a $100 million annual cap, will gain the support necessary to carry it to the governor’s desk. In the meantime, Ohio’s film incentive program will have to make do with $40 million annually, so be sure to check on the availability of funds with a film commissioner before applying. 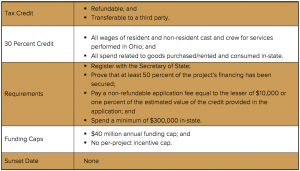